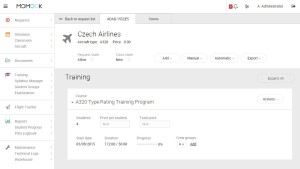 MOMook – the aviation training management software introduced a new design last week. It is already implemented in the MOMook system. The team behind the system wanted to have a unique style, which would differentiate them from competitors, but most importantly would be easy to use for the clients.

The whole team, developers and designers have put a special emphasis on making the system easy to read. Users may be looking at MOMook’s interface for multiple hours a day, that’s why it was a key point during the development process to make it as easy on the eyes as possible.

Those who have been using MOMook before, and got used to the old design should not worry, it has not been made into an entirely different thing, it was just made better. “MOMook has been developed in order to have an easier and more efficient training management. It has been designed to be used every day by every segment of employees in the company. This is why the latest focus of developers has been put to improve the design, and make it better, simpler, and more “friendly” to the eyes.”, says Simas Godovan, Senior Developer for MOMook.

The unique look is not the only thing that sets MOMook apart from its competitors. “The system is very simple to use. You don’t have to be an IT guru to get the hang of it, by no means. Also, the system is being further developed and improved to fit the needs of clients. The development team makes the software to fit the specific needs of your aviation training organization. That means that the client gets a unique solution developed just for them.”, says Dainius Meilunas, the Head of Business Development for MOMook.

MOMook plans to have even more flexibility in the feature, be available on all of the platforms out there, and be even faster. They want to base their improvements on numbers, and hard facts about the system, so the more you use it, the better they will be able to make it.

MOMook is an intelligent business management software designed specifically for aviation training centers. This is a smart tool used to organize the entire training system, manage most of your day-to-day issues from one environment.

MOMook is information technology company with a team of in-house developers, aviation pioneers, strategic thinkers, and innovators who are passionate about new technologies solutions developed for aviation training centers.

Do Smart. Do Simple. Do Grow.

This is a smart tool used to organize the entire training system, manage most of your day-to-day issues from the one environment.

We use cookies and other similar technologies to help provide our Services, to advertise to you and to analyse how you use our Services and whether advertisements are being viewed. We also allow third parties to use tracking technologies for similar purposes. If you are using our Services via a browser you can restrict, block or remove cookies through your web browser settings. The Help menu on the menu bar of most browsers also tells you how to prevent your browser from accepting new cookies, how to delete old cookies, how to have the browser notify you when you receive a new cookie and how to disable cookies altogether. To learn more, click here.
Necessary cookies Always Enabled

These cookies are necessary for the website to function and cannot be switched off in our systems. They are usually only set in response to actions made by you which amount to a request for services, such as setting your privacy preferences, logging in or filling in forms. You can set your browser to block or alert you about these cookies, but some parts of the site may not work then.

These cookies allow the provision of enhance functionality and personalization, such as videos and live chats. They may be set by us or by third party providers whose services we have added to our pages. If you do not allow these cookies, then some or all of these functionalities may not function properly.

These cookies allow us to count visits and traffic sources, so we can measure and improve the performance of our site. They help us know which pages are the most and least popular and see how visitors move around the site. All information these cookies collect is aggregated and therefore anonymous. If you do not allow these cookies, we will not know when you have visited our site.

These cookies are set through our site by our advertising partners. They may be used by those companies to build a profile of your interests and show you relevant ads on other sites. They work by uniquely identifying your browser and device. If you do not allow these cookies, you will not experience our targeted advertising across different websites.